It is the night between September 15th and 16th, 2022 and Senigallia city, as well as many others small urban centers and villages of Italy’s central Marche Region, have been hit by tremendous flash floods caused by storms on the Adriatic coast, leaving 12 people dead and 50 injured.

Italy’s worst drought in decades over the summer made flooding more likely in heavy rains: that night 400 millimeters of rain fell in the space of a few hours in the Region’s hilltop villages causing rivers to overflow and a huge devastation.

The day after, in the front line, the first ever to act upon the disaster along with civil society organizations, groups of young people have been sighted since the very first hours helping clean up houses and streets affected by the flooding. They have been dubbed “angels of the mud“ (angeli del fango)- a term originally employed for youths who assisted the relief efforts after the Florence floods of 1966. And it is from them, that Senigallia urban resilience starts again, for the second time in few years.

Urban resilience is the capacity of urban systems and communities to maintain their function and recover in the aftermath of an emergency, regardless of its impact.

Among the youth community leaders participating in the Advisory Group of CHLaYdoscope Lucia Campolucci from Senigallia has being a witness and protagonist of the city’s resilience, together with many other youths which will be the target of CHLaYdoscope project, and will be involved by the local partner Warehouse hub. Therefore, we decided to ask her some questions related both to what happened and the topics of our project.

Lucia, how important it is, in your opinion, to be part of a civil society organization or of a community (any community) to organize an immediate response in an emergency?

In emergency situations, such as the one that occurred in Senigallia, teamwork is fundamental.

What matters to effective collaboration is not the personalities or attitudes of single members or person who acts separately. Instead, a compelling direction, a strong structure, and a supportive community and context is very much important.

I am community animator in a project called Policoro, an initiative which tackle youth unemployment, promoted by the Catholic Church led Organization Caritas.

Caritas was among the first organizations, with its community of people, especially of young people, to provide a concrete answer in the disaster, both offering a shelter to those who lost their houses and organizing volunteers’ actions. As a youth volunteer belonging to Casa della Gioventù Social Cooperative, I was also following the emergency plan set in place by Caritas and, in my turn, orienting young people who wanted to help towards the emergency action plan set in place by this organization. Within this framework also the citizens have been able to better help each other.

And finally, the Municipality as well had to strictly collaborate with Caritas and the Civil Protection Body to provide an immediate and safe response to the affected population.

Which competencies do you think youths and their groups have been able to put in place in such a situation and which capacities were missing from those organizations that failed to take immediate action?

Indeed, the situation required us to put in place relational competencies, such as team working, but also empathy and listening when talking with desperate people or when receiving information on the deployment of volunteers in different areas; organizational, planning and management competencies in addition to manual skills (to shovel mud and remove objects).

Those organizations and institutions who failed to take immediate actions have missed managerial and organizational capacities, which also caused an underestimation of the problem, and a long-term vision in the management of the territory to prevent severe consequences.

Many people, including many young people, beyond their homes have lost their businesses and shops. What is your feeling, after such a disaster, a young person is more inclined to leave and to start all over again elsewhere, or you believe youths can find new motivations and resources to stay, and bet again in these small urban and rural areas?

In a moment of desolation like the present one, what remains is the fear that what happened could happen again, and it happened again actually after only 8 years (Marche region was hit by heaving flooding on May 2014). The problem, for many young people, is not to put back their business but to experience work and everyday life with fear.

Entrepreneurs, especially young entrepreneurs, need institutions capable of offering, in addition to economic support, a supportive environment. Youth must feel that there is someone who take the risk with them, and who can contribute to provide stability and protection for them and their business to develop in this territory, because it is important for the urban and rural area they live in and for all the citizens. 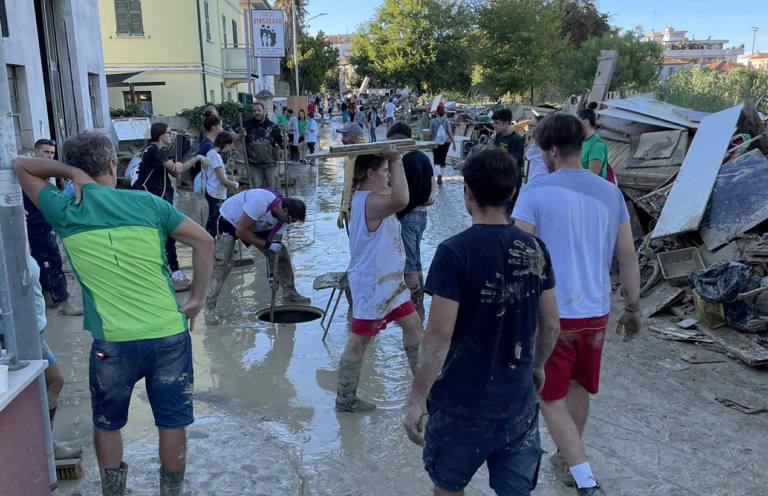 From your perspective, how do you get out of such a situation? Which competencies, skills, resources, assets do you think youths need to be able to activate themselves with their communities in the recovering phase?

To get out of this situation, in my opinion, solid planning and a long-term vision are needed.

Local Organizations and the community have been ferly good at responding to the first needs of the citizens, but now together with economic aid, they need to design structured security plans, and above all start bottom-up, citizens -focus exercises to really show proximity and attention to people’s needs.

The vision, planning and grounding of the interventions which will shape the future of our territory should be driven by participation, listening, empathy and above all collaboration: after having experienced the effectiveness of really working together and being a real community in the emergency it would be really a pity to go back to be individualistic, as it happened after the early stages of the Covid19 pandemic. We need to be able to cultivate the sense of community.

Youth are an integral part of our societies and resilient communities can’t exist if they are not involved in the local development /policies … Do you see it possible?

I think that it is mandatory that youths start to take part and engaged in decisional process. Also, intergenerational relationships are difficult but necessary. These processes can be gradual, but they can start within active communities which can create spaces for both intergenerational exchange and dialogue between youths and decision makers.

The role of creative industries in promoting youth engagement

Are you a leader in your community? | Open Call for Participants